New! We can throw axes again – you can choose to play indoor at our mega center at Kajuhova 35 or outdoor in Orehov gaj!

That’s right! The most Instagrammable game that has completely rocked Canada and the US has arrived in Europe!

The best fun in town!

At “Axe Throwing Europe™ Sekiromet®”, the largest European center of axe throwing, located at Kajuhova 35 in Ljubljana, as many as 100 players can compete at the same time. Under the guidance of an axe-pert instructor, six players can throw at one target.

An exciting experience for everyone!

Nothing compares to the feeling of when the axe sticks into the wood at the center of the target. Everyone can enjoy in the game, regardless of strength or gender, the technique is what’s important.

Don’t worry: the game takes place under the guidance of an axe-pert instructor in a fenced-in space. After the instructor explains the rules and shows you the right technique, you can enjoy the fun competition games in a 90-minute guided program.

A great opportunity for a gathering with friends, birthday celebrations, bachelor and bachelorette partys and teambuilding events! You can also surprise your loved ones with a gift voucher! 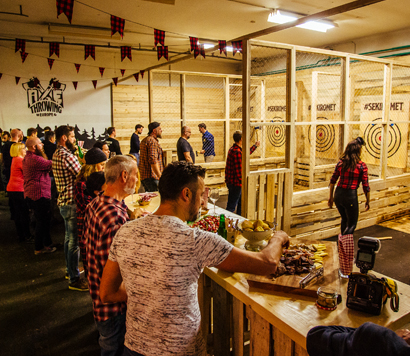 AXE THROWING EUROPE™ – LJUBLJANA, KAJUHOVA 35. Up to 100 people can compete at throwing axes at the same time on 12 targets and in more than 300 m2. 90 minutes of fun awaits you ! Here you will have an hour and a half of crazy fun – axe throwing! 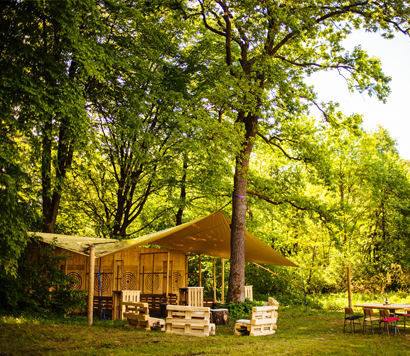 In the Orehov gaj we have a summer venue of throwing axes. There are six targets in three ranges. The venue is especially suitable for companies and groups of 10 people who want to continue to socialize with a picnic in nature. Pre-booking via e-mail is mandatory. 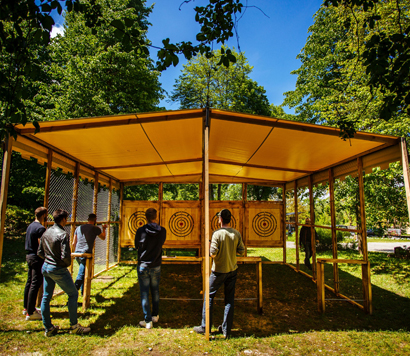 AXE THROWING EUROPE™ can also happen at your place! Original mobile pop-up events in your yard! Minimum lease: 2 targets for a 180-minute event. A program for up to 24 people or a shortened demonstration version for larger groups. Ask for a quote >> 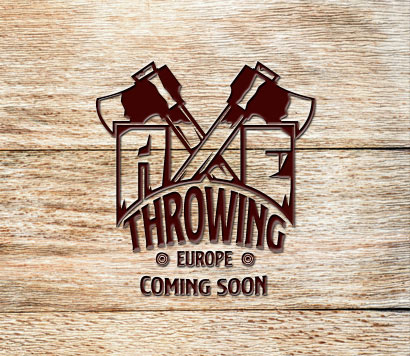 AXE THROWING EUROPE™ soon in your city? We invite you to participate! If you like axe throwing and you believe that it would spice up the touristic and sports offer of your city, just let us know – together we’ll be even better!

The best description would be “like a darts, but with axes”. The teams of Escape Room Enigmarium® and Orehov gaj have joined forces, added the Slovenian real life game knowledge to this tried and tested concept, spiced it up with a pinch of tradition and created something completely new and crazy – which can best be described as: “Sekiromet™”! (From the Slovenian words sekira (axe) and met (throw).)

The thrilling game that has completely addicted Canada and the US has arrived in Ljubljana! In probably the biggest European AXE THROWING Center at Kajuhova 35 (next to Bauhaus in BTC), up to 100 players can compete simultaneously at 12 targets. Of course, under the careful guidance of experienced instructors, who will take you on an hour-and-a-half-long program with fun guided games for an unforgettable (and safe) adventure.

Where does it come from?

Combining its long handle with one of the first prehistoric tools, the axe is the grandmother of all tools (and weapons). Initially, it was a made from stone, later, from bronze or iron. The Franks, our northern neighbors, began with axe throwing in the 5th century, who went into battle equipped with axes.

The ancient Celts were the first ones using axes for sports purposes, and the popularity of axe throwing is still preserved in Nordic places. In recent years, the Canadians and Americans were the first ones who started throwing axes for fun! This has evolved into a modern sport practiced in more than 50 countries around the world. Our Axe Throwing Europe™, which opened its doors in Slovenia, the green country of forests, with a long forest tradition is also member of the most widespread competition sports league WATL or the World Axe Throwing League.

Did you know that this September 2018 the Second Axe Throwing Day and the First National Championships in Axe Throwing took place at Lavričeva cottage? In this case, with a slightly heavier, two-headed version of the axe. And last but not least, for the fifth consecutive year in Kočevje, Slovenia hosted the world championship in – chainsaw throwing. Cute and freaky. 🙂

It sounds dangerous. But is it really?

Taking into account the rules and instructions of the instructor, axe throwing is no more dangerous than darts or bowling. In Canada and the United States, where they have been throwing axes for a couple of years now, they know almost no injuries, as the rules of throwing prevent dangerous situations. Safety first: The enclosed spaces for throwing and appropriately trained instructors ensure that all players understand and respect the rules of the game. PS: We do not use axes with rubber handles and rubber floor tiles, so axe can’t bounce back.

Axe throwing is carried out under specific and precisely determined rules by WATL. Entrance to the fenced range is only allowed under the supervision of the instructor. The instructor informs the participants about the rules and instructions for safe play and leads the participants through the program of various games and explains the rules of scoring before each game.

Where do I find you?

Axe Throwing Europe Center™® can be found at Kajuhova 35 (intersection of Cilenškova ulica and Kajuhova ulica) on the outskirts of Ljubljana’s BTC, next to Bauhaus. There are signs leading to the entrance as well as enough parking spaces in front of the facility. From the city center, you can also come by LPP bus No. 2, 7, 25 or 27, or, of course, on foot or by bike.

The only necessary equipment or gear to bring with you is closed shoes (sandals or slippers, that expose bare feet, are not allowed). You’ll receive an axe and all other necessary equipment for the game in our center. The game is played with standard and proven axes, so your own axes are not allowed. You’ll feel the most comfortable in casual clothing, and particularly at home dressed in “lumberjack” style: red & black flannel shirts or accessories (and beards) are desirable, but of course, not required 🙂

The game is not about strength, the most important thing here is the technique. That’s why everyone can have fun, regardless of strength or gender. It’s important that before the game each player signs a statement saying that he/she understands the rules and will respect them. Youth under 18 years old (we recommend that children are older than 8 years) can play only in the presence of a parent or legal guardian who signs the statement for them.

The center at the Kajuhova 35 is also accessible by wheelchair. Pregnant women and people with health problems are advised to consult a doctor before the game.

How does the program run and for how long?

The program, which we call a “show” takes 90 minutes. Up to six players can play on each target. If you come in alone or in two, prepare to meet new people – we combine teams so that we can provide a comprehensive program and the full experience of axe throwing. The program is conducted under the guidance of experienced instructors: from presentation, rules and security procedures, demonstration of the right throwing, through fun competitions in various games and a final tournament who will determine the winner. Later, you can celebrate the results in the social area.

How many players can play?

At the center, we have 6 ranges with 12 targets. The optimal number of players is from 4 to 5, the maximum number is 6. This means that from 60 up to 72 people can throw axes at the same time. If your group is bigger and you buy all the space, we will adjust the program so that everyone can enjoy throwing axes. Even if you come alone, you will have fun as we combine players and make sure they can play in team games. This also gives you opportunity to meet new people and have fun. Experienced players who will want to visit us more often and train for the championships will also have opportunity for individual training at club prices.

What about food and drink?

No worries! Part of the center is also intended for gathering and a catering offer of food truck, there are also selected drinks and snacks. When booking for larger groups, request an offer for food and drinks in advance. We recommend that you play the games first, and after you’re done with throwing axes you can enjoy food and drinks. Bringing your own food and drinks as well as bringing them into the fenced range for throwing axes is not allowed (you are also not allowed to take axes out of the playing range).

I like it? Where can I buy a gift certificate?

Treat your loved ones with an original gift – a gift certificate for excellent and wacky fun – a voucher for axe throwing! Write us an e-mail: info@axe-throwing.si

One or two players

Reserve date and hour through our online reservation system above – simply select date, hour and number of people. You can pay via PayPal (which allows secure payment with the card), via pro forma invoice – write to info@axe-throwing.si. Or you can also pay with cash on arrival.

Throwing axes under the guidance of the instructor is more fun when players are arranged in groups – the minimum number of players is 4, the optimum 10 and the maximum 12 players per fenced range with two targets. Expect pleasant socializing, competitive atmosphere and new friendships!

For bigger groups we offer the possibility to PRIVATELY LEASE a range (up to a maximum of 12 people) or the entire center. Call us or send us a mail to info@axe-throwing.si

Please come on time or at least 10 minutes before the start of your term at Axe Throwing Europe™ Center at Kajuhova 35. If you arrive by car, park at marked parking spaces in front of the center and follow the signs to the main entrance.

Wear closed shoes (sandals are not allowed), red-black-colored shirts (and beards) are desirable, but not mandatory – you receive everything else with us. Since axes and alcohol do not belong together, come sober.

Wait at the reception for instructor – he will come to you and take you to the fence, explain the instructions and ask you to sign a mandatory statement about respecting the rules and playing at your own risk… then “show with axes” can start!

WORK HOURS: after prior booking of the term through the reservation system above (or via the previous telephone announcement)

UPDATE 13th March:  Despite all safety precautions (described below) we decided to stop bookings from 16th in 27th March / during the school lockdown in order to stop spreading the coronavirus.   The tournament, that has been [...]

We are proud that we've got recognized as the Unicorns! The "Conventa Best Event Award 2019 - Winner of the Audience" award is ours! It has been an honor to compete among 40 exquisite projects [...]

The first national championship in Axe Throwing by WATL SLOVENIA 2019 will be held on May 17, 2019 at Kajuhova 35 in Ljubljana – we promise a tense match and a crazy party! We have [...]

Find out more or adjust your settings.

This website uses cookies so that we can provide you with the best user experience possible. Cookie information is stored in your browser and performs functions such as recognising you when you return to our website and helping our team to understand which sections of the website you find most interesting and useful.

Strictly Necessary Cookie should be enabled at all times so that we can save your preferences for cookie settings.

If you disable this cookie, we will not be able to save your preferences. This means that every time you visit this website you will need to enable or disable cookies again.